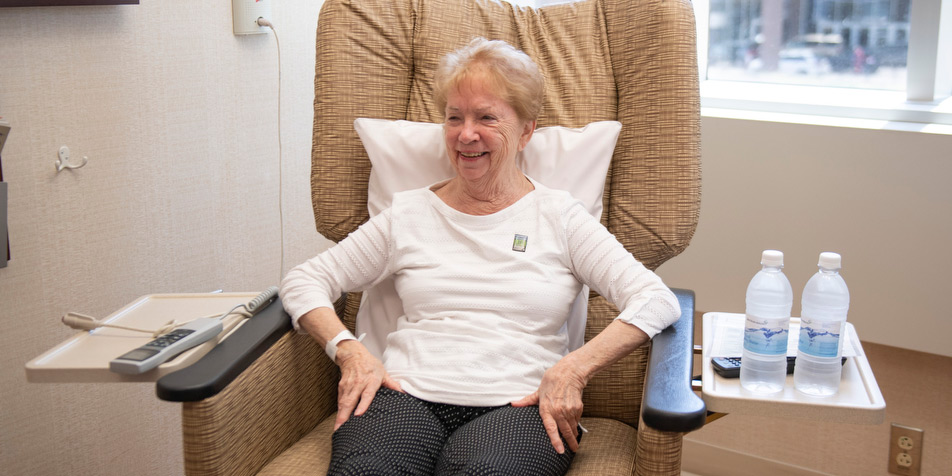 The treatment of melanoma is typically determined by stage. Most melanomas are identified at an early stage and are treated with wide local excision and sentinel lymph node biopsy. At Spectrum Health we have a variety of treatments available for patients with stage III or stage IV melanoma as well. Our team of experts will meet to discuss your case and provide a comprehensive treatment plan tailored to your individual situation.

Deep inguinal lymph node dissection is reserved for cases where melanoma has spread only to these lymph nodes that are located deep within the pelvis. Often a large incision has been required to gain access to this area to remove the affected lymph nodes. At Spectrum Health we utilize a surgical robot to perform this procedure resulting in smaller incisions, less pain, and more rapid recovery. A series of small incisions are made in the abdominal wall and the abdomen is filled with carbon dioxide to create space for the surgeon to work. The robotic “arms” are delivered through these small incisions in to the abdomen where they are then controlled by the surgeon. The robotic system provides 3D vision for the surgeon and the robotic instruments allow for simulation of the movement of a normal human wrist. Though lymphedema of the leg is still a potential complication as with minimally-invasive inguinal lymph node dissection above, the robotic approach has been a wonderful improvement on this otherwise challenging procedure.

Perhaps the most significant advancement in melanoma care over the last decade has been the emergence of immunotherapy as a treatment options for melanoma. Though the process is very complex, in layman’s terms, the immunotherapy drugs unmask the melanoma’s ability to hide from the immune system which allows your own immune system to fight off the cancer. This was first introduced for patients with stage IV melanoma, melanoma that has spread to other organs or distant lymph nodes. With the success observed in stage IV melanoma, immunotherapy was then tested in stage III melanoma, when the only evidence of spread is to nearby lymph nodes. Immunotherapy has been shown to reduce the risk of recurrence by 20% in these patients and has now become the standard of care for patients with stage III melanoma following surgery. The most common drugs used are nivolumab (Opdivo®) and pembrolizumab (Keytruda®) and these drugs are given as infusions every 2-3 weeks for 1-year after surgical removal of stage III melanoma. There are many similar drugs being studied, along with investigating different ways of giving the drugs we already use. If immunotherapy is an options for you, a consultation will be set up with our Medical Oncology team to discuss the full risks and benefits associated with this treatment.

Targeted therapy drugs have been another major advancement in the care of melanoma patients. Approximately 40-50% of melanomas carry something called a BRAF mutation. This is an abnormality in the genetic makeup of the tumor itself and is not associated with gene mutations passed down from parents to children. BRAF inhibitor drugs were developed to block this pathway and prevent the melanoma from growing and surviving. While initially successful, recurrence rates were high with the first wave of BRAF inhibitor drugs. An escape mechanism was identified for how tumors worked around the BRAF inhibition leading to a second class of drugs known as MEK inhibitors. This combination targeted therapy is administered in pill form which adds to the convenience. Currently targeted therapy is used in selective cases of stage III and stage IV melanoma. If you have stage III or IV melanoma, our team will test your tumor for the BRAF mutation automatically to see if targeted therapy would be an option for you. Though being able to take a pill is an attractive option, these drugs do have side effects that can be significant. Our multi-specialty team will help to present the options for what is the best course of action tailored to your specific situation.

Radiation therapy is uncommonly used for melanoma, but may play a role for some patients. Radiation can be used in the setting of spread to the brain or in some patients with large or numerous lymph nodes affected by melanoma. Our expert team of Radiation Oncologists provide consultations for patients who are potential candidates for radiation therapy to discuss the pros and cons of this option.

Isolated limb infusion is used for locally-advanced or in-transit melanoma of the limb. In the operating room, catheters are placed inside the blood vessels of the affected limb by our Vascular Surgery team. Next, the limb is isolated from the rest of the body’s circulation using a tourniquet. A high-dose chemotherapy agent is then circulated through the limb via the catheters to treat the melanoma. The limb must be isolated from the circulation because the chemotherapy is too toxic to be given to the rest of the body. As part of the procedure, the limb does not receive blood flow for approximately one hour. Because of this, there can be damage to the muscles of the arm or leg resulting in significant swelling. You will be required to stay in the hospital for up to one week to monitor the swelling and muscle damage. Response rates are high with isolated limb infusion as tumors shrink or go away in 60% of cases. Newer reports using immunotherapy with isolated limb infusion have increased response rates to 85%. If you are interested in discussing isolated limb infusion, please set up a consultation with our surgical team.

If you have been diagnosed with cancer and would like a consultation or second opinion.