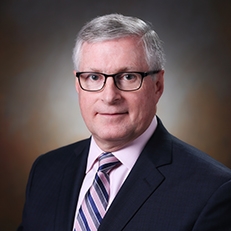 Prior to the two health systems integrating in 2018, Dr. Hamel served as chief executive officer of Lakeland Health for nine years and held various other executive roles with the organization over the previous decade. As Lakeland CEO, Dr. Hamel successfully integrated into the system the largest multispecialty medical practice in Berrien County, the former Community Hospital Watervliet, and Hospice at Home, which resulted in the area’s only dedicated hospice residence.

Through his “Bring Your Heart to Work” initiative, featured in Harvard Business Review, he shared his vision for connecting caregivers’ tasks to the heartfelt needs of those they serve. Under Dr. Hamel’s leadership, Lakeland launched a systemwide electronic health record, and the organization became first in the state of Michigan—as well as the region—to be certified at Stage 7 by HIMSS Analytics. He joined the Lakeland Health medical staff in 1980 as vice president of medical affairs and served in multiple roles, including medical staff president and executive vice president.

An experienced family physician, Dr. Hamel treated southwest Michigan residents for 23 years at University Medical Specialties in Berrien Springs. In addition, he served Andrews University in a number of roles, including clinical professor, director of the university’s health services, president of the alumni association and board member.

Dr. Hamel graduated with honors from Andrews University in Berrien Springs, Michigan, and earned his medical degree from Loma Linda University School of Medicine in Loma Linda, California. He also holds a Masters in Health Services Administration degree from the University of Michigan School of Public Health. He also served as a major in the United States Air Force.

Dr. Hamel is a member of the Alpha Omega Alpha Honor Medical Society and the Honor Society of Phi Kappa Phi. He serves as a board member of the Michigan Health & Hospital Association board and executive committee, Affirmant Health Partners and Southwest Michigan Economic Growth Alliance, and co-chair of the Michigan Great Southwest Council. Dr. Hamel was a founding member of Affirmant Health partners—the state’s largest clinically integrated network, and was named chairman from 2017-2019.